Back in November last year, I blogged here about the first Sydney Alliance Transport Assembly, where we launched our campaign for improvements to public transport in Sydney.

It's not surprising that transport is one of the issues that the 52 partner organisations of the Sydney Alliance have chosen to work on together. Being able to get around is so fundamental to just about every aspect of urban life.

Our vision for an integrated and effective transport network focuses on addressing the key accessibility gaps with the following standards:
400  (everyone should be within 400 metres of public transport)
15 (that transport should come at least every fifteen minutes throughout the day)
1 (you should only need to pay once for any journey, no matter how many transfers you make)
S (you should feel safe)
C (it oughta be clean)
A (it oughta be accessible to all, regardless of who you are)
A (it should be affordable)

Since that Assembly, the Alliance's Transport Research Action Team has been very busy working on the 'S' in the formula, to take some first steps on the path to making this formula a reality. We've negotiated with councils to improve lighting in council car parks in several suburbs. We're also building a campaign on night-time staffing of key interchange train stations around the city.

Meanwhile, as part of the preparation for our work in 2013, Laurence Troy and I (both members of the National Tertiary Education Union) have been working together with members of the Sydney Alliance Transport Research Action Team to map the city on the '400' and '15' elements of the formula. 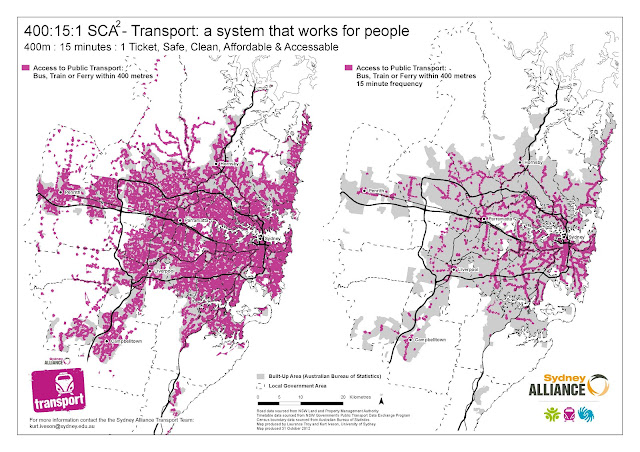 This weekend, an article based on the maps was published in the Sun Herald with some follow up stories on ABC Radio and Channel 7 news.  Today Amanda Tattersall (Sydney Alliance Coalition Director) has an opinion piece published in the Sydney Morning Herald.

You can also interact with the maps on the Herald website, which has produced an interactive version on a Google Map layer.

Big props to Laurence Troy, for his fantastic mapping skills. And also to all my fellow Transport Research Action Team members ... yay team!

Anyways, just in case anyone is interested in a little more detail about how and why the maps were made, here's a bit of an 'FAQ' ...