[This is the first of what I hope will be a series of posts about anti-graffiti in cities. Part 1 here looks at aesthetics, part 2 will dig into the anti-graffiti industry...]

So, graffiti is "ugly", a "blight on the urban landscape", it makes places "dirty", it is just like a "broken window", right? These are typical of the terms used to justify the on-going wars on graffiti.

I guess regular readers of this blog will know my response to this -- for reasons I've got into elsewhere, I think these aesthetic critiques of graffiti are highly problematic. But I've been thinking lately about the fact that anti-graffiti efforts are not only based on a flawed aesthetic critique, but they have their own aesthetics. Here, I want to break down some of the different kinds of urban landscape that we can associate with the on-going wars on graffiti.

As we'll see, what is most interesting about many of the anti-graffiti interventions that I'm about to discuss is how closely they actually resemble graffiti, if considered from a purely visual standpoint...

Countless walls in countless cities now look like examples of some particularly large-scale paint preparation site ... it's as though someone is agonising over just the right shade of brown or beige to paint the city, and is obsessively testing out different shades all over town.

I've actually come to love this swatchwork, in a strange way. As with ghost graffiti (see below), the patches each speak to the hollowness of 'victory' in the battle over some wall or other. The cleansing of graffiti does not produce any aesthetic integrity or purity of its own, just a visible indicator of the desperation of authorities to assert their authority. They're not actually too fussed what the wall looks like, so long as it doesn't have graffiti. And like the swatches of an aspiring domestic decorator, they suggest to me a wall that is not yet finished, still awaiting a decision on its status.


Who is responsible for the brown-outs and urban swatchwork? Many cities have now engaged private armies of graffiti removalists in order to impose their authority on the urban media landscape. And so, increasingly familiar is the sight of teams of people in workvests prowling the streets looking for graffiti to remove or cover.


In Los Angeles, it wasn't so much a private army but the actual army that was engaged to 'clean up' graffiti on the concrete banks of the LA River by covering the banks with countless litres of paint back in 2009.


Closer to home, the City of Sydney has engaged a company called 'Techni-Clean' to implement its graffiti management policies – “Keeping Cities Cleaner” is the motto emblazoned on the trucks and work-shirts of the Techni-Clean street teams, a perfect illustration of the police reading of graffiti as nothing more dirt.

These removal teams are a mirror image of the graffiti crew. They typically work in teams of 2 or 3, they have their own crew names and even colours and techniques. In order to perform their job, they've learnt the 'spot theory' of writers, and are able to identify and police so-called 'hot spots' that provide excellent opportunities for getting up. They obsessively take photos of their work. They just work in the day, is all, and get paid for it.

As my old friend Miguel d'Souza, a hip hop journalist from Sydney in the 1990s, once pointed out: if graffiti crews had any entrepreneurial nouse, they would've set up shop as graffiti removalists, getting paid to paint fresh canvases during the day to fund their night-time re-purposing.

Graffiti removal is sometimes just not 100% successful. As writers experiment with various ink and paint methods to achieve permanence, their efforts are sometimes impossible to completely remove. And where applications of new paint coats are not an option, what is left behind from this chemical wash are ghostly traces of tags and pieces.

These graffiti ghosts haunt train carriages and other infrastructure where they are left behind, trapped in some netherworld between life and death, simultaneously a visible trace of the on-going conflict in spaces which authorities typically claim to have won from their enemy, but a defaced trace, smudged and blurred and faded through chemical washes.

This particular tactic is all about authority -- a graffiti-like aesthetic is embraced as a deterrence to graffiti. The only difference between the two is the authority of the author. Camouflaged spaces like the bus seat above are authorised, authored and applied on behalf of authorities (in the above case, the conveniently-for-my-argument named State Transit Authority, whose initials make a good crew name which can be tagged all over the seats). It looks just like writing on seats which is applied without permission and is therefore unauthorised.

A range of cities have dabbled with public advertising campaigns intended to mobilise citizen-soliders in the wars on graffiti. Perversely, lots of these campaigns actually mobilise graffiti aesthetics in order to enhance their street cred. 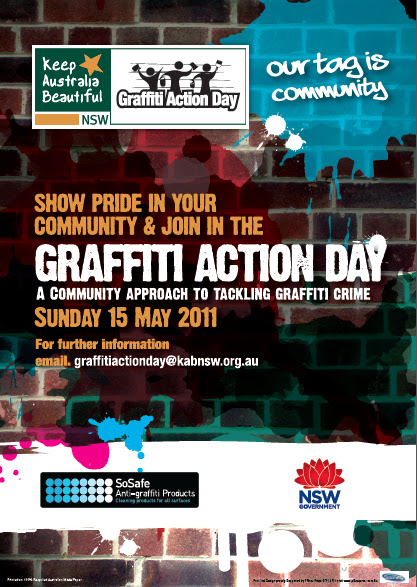 Check the poster above for Graffiti Action Day, a joint initiative of the NSW State Government and Keep Australia Beautiful, a non-government organisation devoted to reducing the impact of litter on the environment. Visual impact here is achieved through use of graffiti-style fonts and splashes of colour. Really. The same graffiti-influenced anti-graffiti aesthetic is used below by the organisers of a graffiti prevention conference. 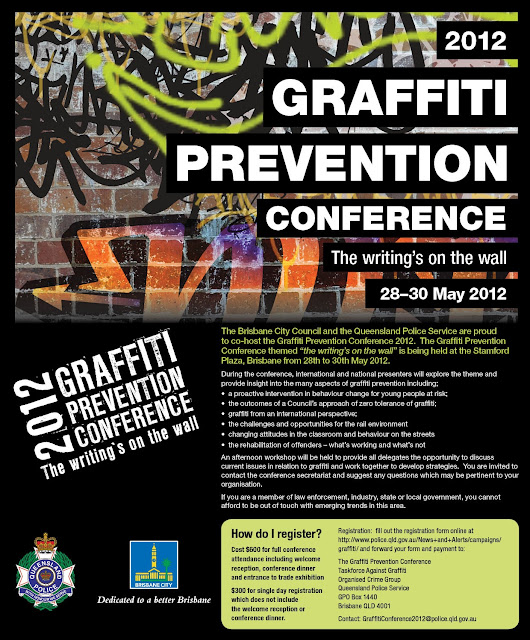 And below we have a poster that appeared on Adshel bus stops in both Sydney and Canberra recently (and pictured in one of Canberra's relatively new advertising-funded bus stops). Again, it uses the colour and dynamism of graffiti styles to attract attention only in order to critique graffiti.

In some jurisdictions, authorities have resorted to frontier-style 'wanted' posters in efforts to catch prolific taggers. The poster below was part of a Crime Stoppers initiative in Devon in the UK. 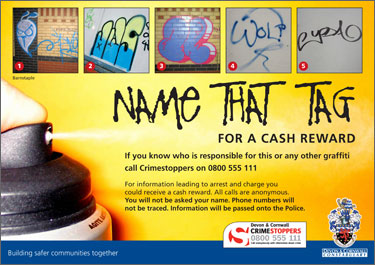 Here, it would appear that the best way to curb a tagger is to give them what they want - blanket reproduction of their tag across the public transportation network. Brilliant! Like several of the other tactics described above, this one actually results in the proliferation of graffiti in the urban environment, in this case 'framed' by the words of authorities.


Every now and again, the leaders of the anti-graffiti armies like to visit the battlefield, getting their hands dirty in the first against graffiti to prove their commitment to the cause. In the photo below, we see Mayor Koch of New York City (one of the pioneers or zero tolerance) visiting a prisoner graffiti removal program and helping out in front of the cameras.

Nearly two decades later, replicating Koch's policies and publicity stunts, UK Prime Minister Tony Blair took time out from waging the war in Iraq to help out with his own war on graffiti.

How many kilometres of barbed wire have been installed in cities around the world to protect spaces from incursions by graffiti writers and others? How many CCTV cameras have been installed? In his great book Taking the Train on New York graffiti, Joe Austin documents the rolling out of barbed wire to protect the lay-ups where subway cars were stored overnight, which had been the favoured painting place of NYC writers.

In order to remove once legit graffiti walls, some desperate authorities have sent in the bulldozers - a weapon of choice in urbicide operations the world over.


This dramatic picture captured by Cameron McAuliffe in Parramatta documents the outcome of a change of Council policy towards legal graffiti walls. Where these walls were once full of life, a daily-updated gallery of great and no-so-great productions by writers from the local area and beyond, they are now simply gone. As they came down, this rich history was exposed as old paint layers were revealed before the walls were fully demolished. Cameron tells the story in more detail (and with more pics) at his great Writing Ways website.

Counter-insurgency operations: the wall as battlespace

In some cities, graffiti writers will tell you conspiratorial stories about the rogue activities of police graffiti task forces, who have embraced the spray can as a means to communicate threats back to the graffiti writers who are their quarry.

For the last few years in Melbourne, for example, lots of graffiti pieces (both legal and illegal) have been 'capped' with badly-painted CTCV tags. As reported here, plenty of writers suspected authorities are behind the slashing. "Cops That Cap Vandals", perhaps? "Cops Trashing Crap Vandalism"?


This is not the first time such rumours have circulated. Infamously in Melbourne in the 1990s, the tag CTSA was used to slash a number of pieces all over the city. Rumours abounded that CTSA were actually on- or off-duty police, and that CTSA stood for something City Transits Slashing Art. SABETH has a link up on his website to an article about this conflict that appeared in Revelation magazine in 1995.


This pair of 'before' and 'after' pictures that did the rounds last year speaks volumes. As a number of folks have been saying for a while, anti-graffiti efforts play a huge role in shaping evolving graffiti forms and styles (see Joe Austin, Jeff Ferrell, Alison Young and me among many others...). More graffiti is often what re-appears on the clean surfaces produced through much anti-graffiti practice, although the threat of regular buffing tends to privilege the kind of quick-and-dirty styles that don't take as much time/effort/paint to produce. At least this the quick-and-dirty 'after' piece here is pretty funny...!

So, there you have it ... these are a few of the sights that many of us now take for granted in our cities, a new anti-graffiti aesthetic that is the product of the on-going wars on graffiti. Have I missed any?
Posted by Kurt Iveson at 5:53 PM