"The street finds its own uses for things": William Gibson, technology and the city

I've just been reading Distrust That Particular Flavor, a collection of non-fiction pieces by William Gibson that has been published recently by Putnam. 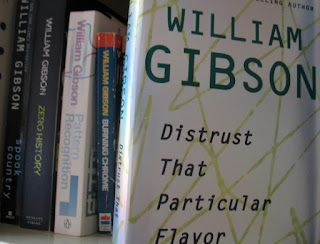 I do love me some William Gibson, and it was a real pleasure to come across this particular passage in a piece called "Rocket Radio" that was first published in 1989.


The Street finds its own uses for things - uses the manufacturers never imagined. The microcassette recorder, originally intended for on-the-jump executive dictation, becomes the revolutionary medium of magnitizdat, allowing the covert spread of suppressed political speeches in Poland and China. The beeper and the cellular telephone become tools in an increasingly competitive market in illicit drugs. Other technological artifacts unexpectedly become means of communication, either through opportunity or necessity. The aerosol can gives birth to the graffiti matrix. Soviet rockers press homemade flexi-disks out of used chest X rays.

The line "The street finds its own uses for things" is one of Gibson's most quoted phrases, and had first appeared in his book Burning Chrome. The idea infuses most of his work, and certainly informs the plotlines of his most recent trilogy of Pattern Recognition, Spook Country and Zero History. In that series of books, Gibson's various characters make all sorts of different and unintended uses of a whole variety of techno-gizmos that are all commonly available today -- mobile phones, laptop computers, RFID chips, iPods, GPS devices, and the like.

Gibson is a strong believer in the role of technology in shaping society, but as the essays in this book make very clear, his fiction is not crafted or intended as an exercise in techo-determinist futurology. For me, it's Gibson's insistence on the potentials of new technologies to be modified, hacked, twisted and contorted that is one of the things that makes his writing so thrilling. Indeed, my current research on location-aware mobile media and the city has been heavily inspired by his recent set of novels. I especially love the interaction in those books between state agencies (both overt and covert), crime networks, subcultures, artists, corporations and advertising agencies, each paying close attention to the others as they try to adapt their practices to new circumstances. I also love the persistence, combination and mutation of 'old' technologies in his stories. And Gibson's urban imagination is also really interesting. Places like Tokyo and Moscow are every bit as crucial to his vision as London and New York, which is certainly an inversion of the dominant urban imaginary of English-speaking urban studies.

As Gibson is the first to emphasise, the near-futures imagined in his various books have certainly been overtaken by unexpected events. In the first book of his current trilogy, one of the key plot-lines concerns the circulation of mysterious snippets of video via internet bulletin boards. As he points out in an essay in Distrust That Particular Flavor, he might have written this kinda differently if he'd anticipated something like YouTube. Likewise, in his his first novel Neuromancer, "there's something like the Internet, but called 'cyberspace', and a complete absence of cell phones"!

But these novels don't stand or fall by their predictions. They're still compelling reading for the insights they offer into the times in which they were written. As he puts it in one essay:


The Future, capital-F, be it crystalline city on the hill or radioactive postnuclear wasteland, is gone. Ahead of us, there is merely ... more stuff. Events. Some tending to the crystalline, some to the wasteland-y. Stuff: the mixed bag of the quotidian.

Please don't mistake this for one of those 'after us, the deluge' moments on my part. I've always found those appalling, and most particularly when uttered by aging futurists, who of all people should know better. This newfound state of No Future is, in my opinion, a very good thing. It indicates a kind of maturity, an understanding that every future is someone else's past, every present someone else's future. Upon arriving in the capital-F Future, we discover it, invariably, to be the lower-case now.

The best science fiction has always known that, but is was a sort of cultural secret. When I began to write fiction, at the very end of the Seventies, I was fortunate to have been taught, as an undergraduate, that imaginary futures are always, regardless of what the authors might think, about the day in which they're written. Orwell knew it, writing Nineteen Eighty-Four in 1948, and I knew it writing Neuromancer, my first novel, which was published in 1984.

Indeed, the title of the this collection comes from a passage in an essay which riffs on the relationship between science fiction, history and the future. He expresses a distrust for that flavor of science fiction which is all about the capital-F future, and which in order to get there must literally destroy the present and all its messy possibilities.

Likewise, I'm very much hoping to avoid the utopian 'crystalline city on the hill' which characterises so much contemporary talk on the so-called 'smart city', as well steering clear of the dystopian 'wasteland' envisioned by critics of these new technologies who consider them only ever as agents of the military and/or capital. I'm more interested in what kind of stuff is happening. Of course, some of this stuff will no doubt be good or bad, and I certainly want to offer some judgements here. But I'm less interested in judging the technologies, and way more interested in critically exploring their uses as they become caught up in various habits and projects that are taking shape in cities.